10 Best Offices in India You Can Take Inspiration from - DevX

10 Best Offices in India You Can Take Inspiration from

Offices are no longer expected to epitomize monotony and boredom for their employees. The hard work of each employee is reciprocated by providing them with good infrastructure and facilities that help them relax and avoid stress as much as possible.

While aesthetics are generally considered secondary in the design priorities of an office, they have been proven to affect the productivity and concentration of workers.

Here’s a list of the 10 Best Offices in India you can take inspiration from.

The DevX office in Hyderabad has been designed for not one or two categories of workers but for simply everyone. With its dynamic design concepts spread throughout the office, it has one place or another for all working styles.

The most inspiring factor of the design elements of the DevX office is its unending ability to accommodate diversity. It can host conferences, events and also provide a well-equipped space for a solopreneur.

It is a managed workspace that helps anyone working here step out of the monotony of routine and work in an entirely new, more refreshing atmosphere.

A sales office is a direct reflection of a company’s brand values and priorities. Sales professionals with excellent communication and convincing skills can only talk about the company, but an exceptional office interior will speak for itself as well as for the company.

The Baya Park office positioned in Mumbai has nest-like working spaces. The idea is to build workstations inspired by the real-life visuals of a nest and put it right in the middle of an office as a separate space, a cabin.

The lifelike nest cabin at Baya park is able to carve out a dedicated space for specific purposes in the most creative and innovative manner possible.

The interior design of the White Canvas office located in Bangalore takes direct inspiration from the firm’s name – White Canvas and attempts to bring the same to life. For the same reason, the office interior is largely adorned with serene tones of white. It is a reflection of what the brand is and what it stands for.

White Canvas is a creative agency, and the idea behind the name of the agency and consequently its interior is using a blank canvas for jotting down the aesthetic aspirations of its clients and translating them into meaningful, creative ventures that are capable of leaving an impact on the beholder.

White Canvas works in a manner that allows it to use its blankness to grasp as much as it can from the client’s interests and priorities. It prioritizes the client’s opinions and needs over its creative expertise and consequently creates things that never fail to impress its clients.

Myntra is essentially a shopping site driven by fashion trends. Keeping the same priority at the center of its design approach, the Myntra office at Bangalore was designed and brought to life.

The office is drenched in livening colors, visual art, and a lot of other quirky elements. The idea is to give their space of hustle a welcoming aura. The latter is accomplished by adding colors and distinctly bright visual art elements to the space.

This astonishingly creative place of work was brought to life after a series of direct dialogues between the CEO of Myntra and the main architect of the project. His ideas were used as a base for creating a space that would suit and complement the brand in the best manner possible.

Inspired by the globally recognized architectural masterpiece Taj Mahal, the Microsoft Office in Noida stands tall as a true work of art. The office made headlines as soon as it was inaugurated by the company.

This iconic workstation is covered in ivory white and has been admired with exquisite jaali work taking inspiration from the masterpiece itself.

With arch doors and domed ceilings, this workstation was a welcome surprise to all its workers who were supposed to return to the office after a year of working at home.

General Motors is currently headquartered in Gurgaon. Their office is often looked up to as a source of inspiration by a plethora of designers.

The overall design concept of the space is largely dominated by geometrical patterns and pleasant tones. The formerly mentioned appeal of the space is reflective of the image of General Motors as a whole.

An office interior should not only suit its workers but must also complement the brand image of the organization it houses.

SVF is one of Eastern India’s most popular entertainment agencies. The company moved to its exquisite new office in Kolkata in 2017. The change of location has almost helped them rebrand themselves.

Initially known as Shree Venkatesh Films, SVF marked a great day in its history by moving to its new office in Rajdanga Main Road, which according to its director, will act as a catalyst for their upcoming creative ventures.

The reception area is adorned with an astonishingly exquisite chandelier that is made up of trumpets. The entire workstation is filled with a warm orangey light adding to its look that has been inspired by mainstream Bengali culture. Bengali culture joins hands with contemporary design concepts and comes to life in this magnificently beautiful structure.

The Amazon office at Hyderabad is Amazon’s biggest office in the world. Spread across 9.5 acres, it has a helipad and 49 elevators.

Facilities provided to its employees by this Amazon office are simply outstanding. Shower, prayer rooms, and quiet rooms are some of the most unheard-of features of an office that are part of the Amazon office at Hyderabad.

It has a cafeteria that is open 24/7. It can house nearly 15000 employees at once in its gigantic premises. The interior is inevitably adorned with quirky color combinations and elegant design elements that are in vogue in contemporary times.

Google has dozens of offices spread across the globe, but it’s an office in India that can compete with most of its counterparts abroad. The interior design of this office is employee-centered.

With facilities like their amazing floor cafe – Cafe D’art with its live food counters; recreational areas with TT, pool, Xbox; a space dedicated especially to refreshing conversations; a library, and a myriad of other things, this office stands tall as a remarkable source of inspiration for companies and designers across the country.

They are able to stand out amongst their competitors primarily because of their focus on creating a space for the people who are actually meant to utilize it the most.

The Adobe office in India has an interior on which color has been lavishly spent. The adjectives that first come to mind as soon as someone mentions Adobe are creativity, innovation, newness, and whatnot.

With separate areas allocated for recreational activities or simply chatting with colleagues, Adobe’s office at Noida is the epitome of vibrance. It is a true reflection of the brand and its reputation.

Sources of Inspiration are many, but if you are looking to give your employees something extraordinary, something that can actually benefit them, check out this list of 10 Best Offices in India you can take inspiration from. 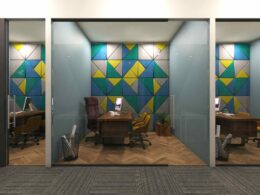 Top 8 Leading Office Interior Designers in Lucknow for Your Workspace

Commercial office spaces have drastically changed over the years. There are no more minimal off-white walls with uncomfortable…
byDevX
345 views
One comment 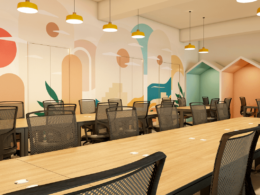 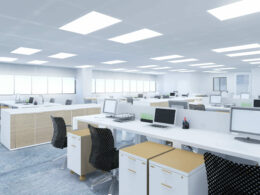 8 Best Offices in the World with Spectacular Architecture and Design

Can’t wait to give your employees the best workstation that they can ever imagine? Well turns out you…
byDevX
379 views
No comments 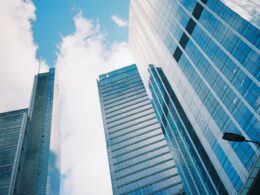 Top 5 Corporate Office Buildings To Look Out For in 2022