8 Best Offices in the World with Spectacular Architecture and Design

Can’t wait to give your employees the best workstation that they can ever imagine? Well turns out you just have to blend the right amount of creativity and concern, and there you have it – one of the best office in the world.

Here’s a list of the eight best offices in the world with spectacular architecture and design that can help you innovate and come up with a mind-blowing idea yourself.

Huddled next to the shores of Lake Ontario is the gigantic workstation of Corus Entertainment. The key feature of this building is its waterfront location. Its LEED-CI Gold-targeted interior successfully houses over 70 Corus brands.

The office today stands tall as the smartest and most advanced building in its category in Toronto.

The office is able to occupy nearly 1100 staff members at present in an astonishingly efficient and collaborative space. They have an office that provides its employees with a plethora of spaces to promote socializing and collaborations.

With a five-storey atrium, a three-storey slide, and lounge above two tv studios, the office is able to give to its people the finest version of a workplace that can ever exist.

The culture of Spencer Ogden is aimed at helping its candidates with whatever they need and providing them with a suitable working environment.

Astroturf flooring reclaimed wood tables and American-style diners are some of the key features of their offices spread across the world. With these features, they hope to promote movement and scope for relaxation amongst their employees.

In an attempt to provide their employees with the best, most inspiring offices, they have ended up creating something that stands tall as an embodiment of architectural inspiration for offices across the world.

The White Mountain office in Stockholm, Sweden, is one of a kind. Initially, an anti-atomic shelter, this 1200 square feet of the area lies 30 meters beneath the granite rocks of Vita Berg.

They’re an internet provider with possibly the most astonishingly creative workspace in the world. Spaces within the office are treated differently depending upon the dominance of the presence of rock at various locations.

The ones with too much rock are taken to be places that suit an enclosed working environment as opposed to more open spaces that are suitable for brainstorming sessions and other similar large-scale discussions.

The Selgas Cano office in Madrid, Spain, is an amazingly creative architectural venture that brings together – work and nature. The office lies, literally, in the heart of woods and has glass walls to constantly give their employees a refreshing visual treat of the nature that surrounds them.

Such an office is not only accommodating design that is centered around its employees but is, in fact, using an innovative approach to accomplish the same.

An office in the woods is something that has almost never been heard of outside the daydreaming peripheries of an employee who is tired of his office suffocating between the city.

The Inventionland office at Pittsburg in California is aimed at providing a common roof to a myriad of brilliant minds that look forward to creating extremely helpful, very innovative products using their ideas.

The Inventionland has 16 unconventional workstations that resemble a myriad of things, including a pirate ship, a faux cave, a treehouse, a pet shack, a giant shoe, a cupcake kitchen, and a lot more. The 60,000 square feet expanse of their office is adorned with a plethora of creative settings to inspire innovation and newness.

Can you imagine sliding down across floors when in the office? Well, apparently, people at Ogilvy, Jakarta, can. With a slide adjacent to a staircase and unconventional areas of sitting and working, they give their people one of the most uniquely designed offices in the world.

With a fairly bright color combination that envelops the space, it has brought together various departments under one roof with no clear territorial demarcations between them.

Such an effort can not only promote a collaborative effort within the office but also inspire those who surround them to take inspiration and create similarly and, who knows, even better offices.

Resting on 700 gigantic stainless steel saucers, the Apple’s SpaceShip has been constructed and deliberately kept away from the surface of the ground to avoid any damages that might be caused by a natural calamity.

Resembling a spaceship in appearance, the Apple Park and its circular body are known as one of the wonderful architectural ventures of the commercial world.

One would expect the inside of such a building to be heavily dominated by technologically driven interior design. It, however, has a lot of open space to help its employees avoid the feeling of being suffocated in their own workstations.

The interior is largely divided amongst enormous rooms that have glass walls and entryways. All of the building’s ventilation is natural, thereby making it the world’s greenest office building.

The Hearst Tower Office has its building in the heart of Manhattan, New York City. This is where the renowned Hearst Communications are headquartered.

A wide range of communications and publishing companies that fall within the purview of Hearst has their main workplace in this building.

It has 46 stories. It was designed by Norman Foster – an architect with global recognition and fame. Its exterior is dominated by an exquisite combination of glass and steel that enables it to give off a contemporary look.

The three-story atrium of the office has been adorned with the soothing sound of swift movements of water from the icefall, thereby giving the place a calming aura in the most creative and innovative manner possible.

Making an office that is practical for the employees and simultaneously achieving the goal of aesthetic grandeur can seem like a daunting task, but that is not really the case.

Take a look at our list of 8 Best Offices in the World with Spectacular Architecture and Design that you can use as a source of inspiration to create your own workstation as creatively as you can.

Top 9 Leading Office Interior Designers in Lucknow for Your Workspace

Commercial office spaces have drastically changed over the years. There are no more minimal off-white walls with uncomfortable…
byDevX
1.2K views
One comment

A Beginners Guide To Coworking: How shared office spaces are changing the future of work?

Once known to be a niche concept catering to only freelancers and young startup founders, coworking, as an…
byDevX
3.6K views
5 comments 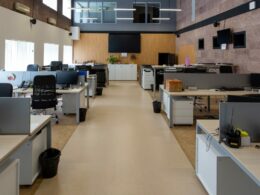 Architecture firms in India are many but finding the one that suits both your aesthetic and your pocket…
byDevX
10.0K views
22 comments

How are Managed Offices Different from Traditional Offices and Coworking Spaces

Workplaces have been through an evolution similar to digitalization. In the manner how digitization changed our life and…
byParth Shah
2.4K views
2 comments